Measure Once Cut Twice: That's the Right Way Isn't It?

It's been one of those days.

Did you hear about the bloke who left the parcel shelf of his car on the roof of the car and drove out of Bunnings? That was me. So that's the caliber of the day and it's not the only thing that went wrong. Why not calm down with your favourite hobby?

The good news is that I think I now have all of the timber to finish the layout.

I wired up my turntable and tested it. It works. It's not as well aligned as I had hoped but the only line coming onto the turntable is curved, so it all works out.

The line is curved so that my garratt can run across the turntable and into a suitably long track.

That's the plan. The reality is that the siding is at least 2cm too short. It's too short because after planning the loco depot, I put in my marshalling yard. When I did that, I altered the track plan a little bit.

Here's what it is. 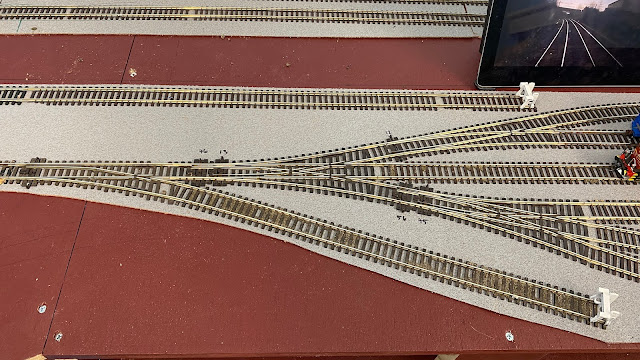 The top track is an extra storage siding which can hold 10 BCH length wagons. The right hand point on the left was modified to fit a tight spot about three layouts ago. It still works. It leads to a Repair In Place (RIP) track. I though that it could be fun. The top three sidings are through roads, the bottom three are dead end sidings. The nearest siding from the ladder holds 4 bogie wagons and I am planning on this holding the guards vans. The top siding can hold the longest train from the Bega staging yard and will be the main arrival track. On the old layout we realistically used only one of the five available tracks as an arrival track.
Below is what it needs to look like. It's not what was originally planned, everything was meant to come of the first three way point. 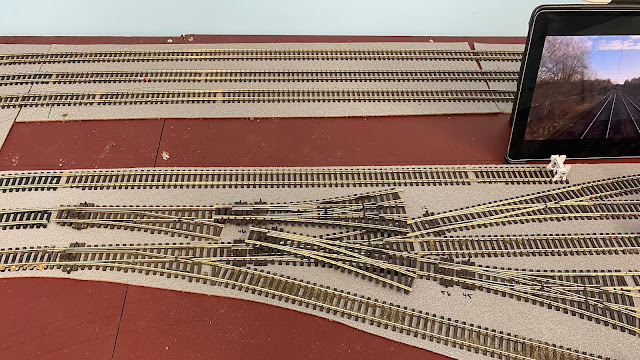 The original idea was to have the ladder start higher but that would make the bottom three sidings shorter.  I can make the change by leaving the bottom 3 way point where it is. The top storage siding will be 1 and a half to 2 BCHs shorter. The RIP track won't really be useful but you could park the shunting engine there. Sidings one and two at the top will be longer by a 48 foot bogie van. The other sidings won't change.

If I move the the top 3 way point back even further, then sidings 1 and 2 will be two wagons longer. Siding 3 will be a little shorter. Siding 4 will be a little longer and sidings 5 and 6 will be shorter. There will also be more work involved. The current siding four effectively holds 10 CH bogie hoppers and a guards van without a loco attached. This is the same length as the two longest sidings in the Bega staging yard. Most trains moving to and from this yard will be 6-8 wagons long therefore the sidings don't need to be longer.

I also nee a little bit of straight track provided by the first point to reduced the hazards and strains of longer wagons going around the reverse curves.

Adjusting this track alignment will make my garratt problem go from this... 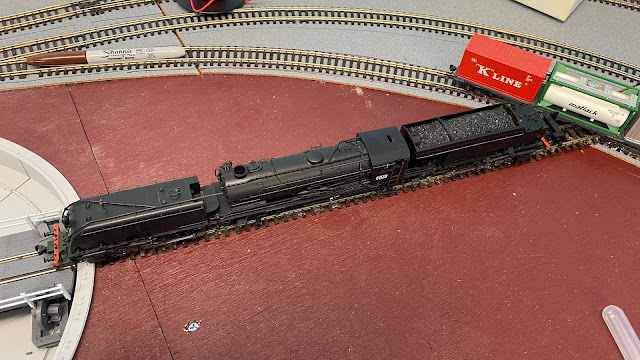 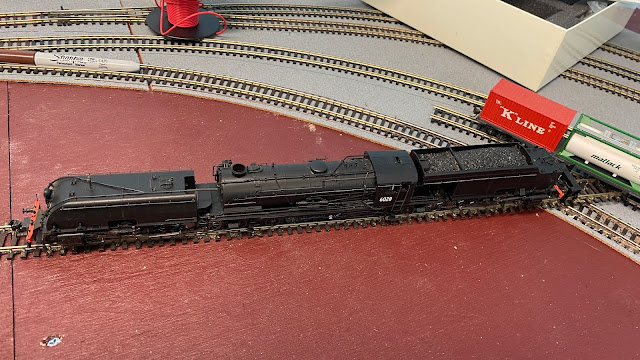 I reckon though, all that can wait until tomorrow.