Where Do You Start?

I have a plan. It's not as complicated as the last plan but it still has three levels and it is still set south of Bega on the Sapphire Coast of NSW.

The baseboards have been put down, I've painted cork to put the tracks on. I'm ready to go.

From the bottom level the tracks rise up to meet the middle level in pretty much the same place, along the back wall and curving around the outside of a return loop. I use the Woodlands Scenic 2% inclines as they are easy to use. I have found that if I use picture mounting cardboard the I can use one incline for two tracks. This set up worked faultlessly since I installed at the end of 2016.

This is a good place to start so tracks were placed on the highest curve of the incline. Too easy.

As you walk into the room, it's on the left. Closest to the edge of the baseboard will be a coal mine. I loved the feature on the old layout and had plans for a flood loader along with the tipple. To access the flood loader without having to run around the train the track needs to pass under the incline. So I built a bridge... a couple of times. The crossing is effectively one curve crossing another.

To work out the bridge, I needed to work out the coal mine. The last one had a loop for the flood loader and another loop for an empty train to arrive and be shunted - normally by a Garratt as it's a great loco for a coal train.

I don't have this luxury for the new mine area. I want an avoiding road for the loader, otherwise there is no need for the tipple. That problem needed to be worked out.

The next issue was the headshunt for the coal mine. I have a train of 12 loaded BCH hoppers which is swapped with another train of 10 empty CH hoppers under the tipple as part of the operations of the layout. On the old layout the headshunt was Platform 2 of Bega Station. It was good as it did not interfere with passing trains. When I measured the headshunt to where the coal branch rejoins the main line I realised that shunting operations would halt operations on the layout as it would block the return balloon loop that turns trains around to continue on their circuits.

The plan for Bega is/was similar to the old layout but with an extra platform and as I found out yesterday, 10 cm narrower. I cut the new boards 35 cm wide for the bottom level with the plan to use 30 cm. The middle level will be 60 cm wide with an incline along the back.

When I eventually looked at a copy of my old layout plan I discovered why the old layout would not fit when I explored different options. I sort of need my 60 cm for the middle level but I need Bega to work. I'm now using 33 cm with 19 mm for the support for the next level. This now gives me enough room for four tracks around two island platforms. This should help me operationally later.

I started at 10:30 with the idea of a couple of hours on the layout and then mow the lawn and a couple of other gardening tasks. By the time I finished on the layout it was time to start dinner and I hadn't laid much track except for a quarter of a curve. The lawn can wait until next weekend.

I'm glad that I had the time to do what I did yesterday as it will make things easier as I move through the lower level. When I started the planning I worked from the top down. The coal branch wasn't really planned neither is the branch line to Tathra. I'm still toying with ideas for this and I figured that it could be the last thing to think about. That's a job for future me to worry about.

I like pictures in my blog but I don't have any images of the layout worth publishing yet, so enjoy an image of my travels in January. It's a Class 170 DMU operated by Cross Country Trains at Leicester on 15th January 2020. Similar to my plans for Bega, Leicester has for platform faces on two island platforms. Leicester was my first stop outside of London that trip. I'd caught an HST from St Pancras and was waiting about 20 minutes at Leicester for a service to Sheffield. From Sheffield I went to Leeds for and hour and then Liverpool Lime Street. After some trainspotting, I caught a train back to London Euston and the Tube to Paddington for the overnight sleeper service to Penzance. 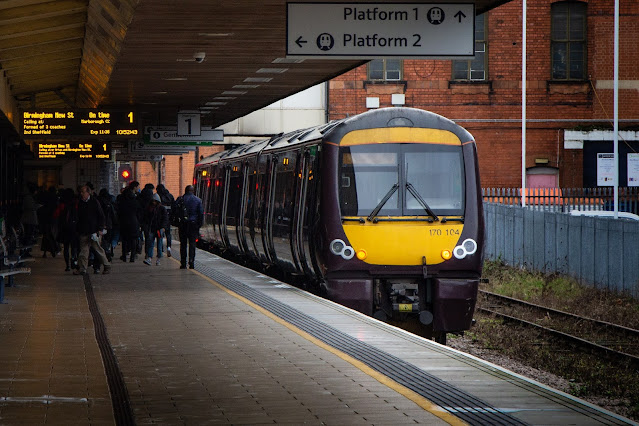 I haven't posted since January. That was 11 months ago.
January was great! I couldn't have asked for a better January. I spent 11 days in the United Kingdom riding trains.

I first had the idea a couple of years ago when Qantas advertised cheap fares during the Australian Open. My wife has been known to head to Melbourne for the event so she wouldn't miss me. It didn't happen. Nor the next year. This year it did.

I was spurred on by the withdrawal of HST sets form the GWR and LNER networks. I have spent a lot of hours on these trains over the years. I wanted one more ride.

I also wanted to ride on a Pacer - just to find out how bad they were.

Of course as the time drew nearer, a fair amount of planning had to take place. I wanted to make sure that I could see as much as I could as well as catch up with family and friends.

I travelled on a Britrail Pass. It gives you unlimited travel for the duration of the pass. I bought a first class pass. You get free drinks and snacks and depending upon the service, a full English breakfast or a fancy dinner.

It was expensive but on my first day I travelled from London to Leicester, Sheffield, Leeds, Liverpool, London and finished on the overnight train to Penzance. (I did have to pay for a sleeping berth though.)

Here's a photo from the first day. I had just caught this HST from London St Pancras to Leicester. I took a lot of video too. I should do something with that. 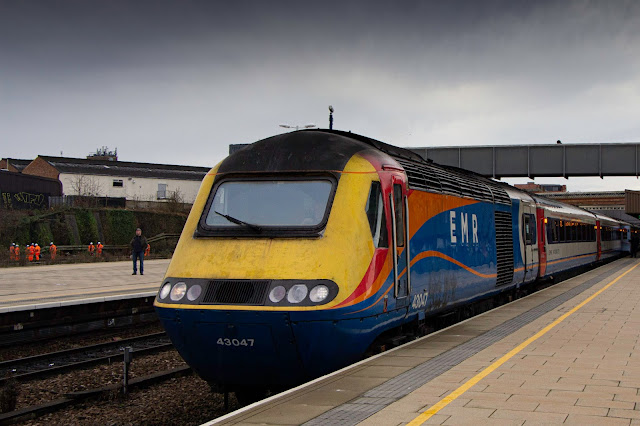 February was very different. If January was great, then February just kicked us in the guts.

Remember that storm on the 8th - 9th of February? It flooded the train room on the Sunday. It also damaged our kitchen but it was the shed that concerned me more. It came up from the floor and soaked the carpet and ruined furniture. The legs of the layout seemed okay.

However, what could was brought inside and the insurance company called. A couple of old department shelves rescued from the skip bin would need some surgery but the old Ikea stuff was... well stuffed.

Lots of plastic boxes were then bought.

We lost a couple of people in quick succession from February too.

If February kicked us in the guts, March delivered the knock out punch.

The shed was drying out. Fans had been going for a while and the musty smell had all but gone. Then we had a couple of hot days around the 19th and 20th March. The musty smell came back and the layout was covered in mould.

A green fuzz covered a lot of bare timber. I cleaned off what I could but I kept finding more. I was also on the bottom of the plywood in areas that I couldn't reach with a spray bottle full of vinegar. Some of my trains had a dusting of spores on the top of them. This was terminal. There was no way that I could make sure the mould would be gone.

The hours of work put into the layout, the hours of joy that it had brought, the hours of fun it would bring. This was the ultimate layout that I could build. It should have seen me good for the next fifteen years.

Everything was packed away into those plastic box that I had bought.

I started to work out a strategy to deal with the problem but with the world starting to fall apart, I'm going to be honest, things were getting to me. Not to mention that I suddenly had to re-invent what I do for work with as little time as possible.

It was time for a break and a venture into a new hobby.
LEGO is a great modelling medium these days. It's a lot different from when I was a kid.

But it's not the same as building a model railway.
For some reason, all the walls in the train room needed to be re-gyprocked so the old layout was in trouble anyway. This was all done by the insurance company. Over a weekend, I went from this... 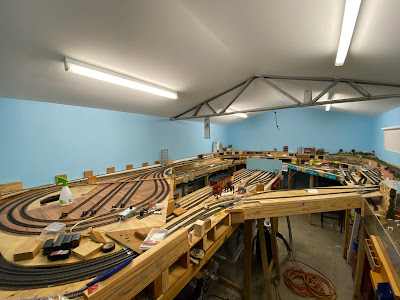 ...to an empty space.
As soon as the money came through for the damaged contents, carpet was put down and timber bought.
After a couple of weeks it now looks like this... 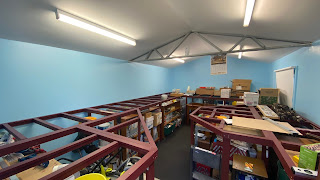 So that the timber doesn't go mouldy again, everything is being painted. The colour of choice was supposed to be a green. However, when I bought the paint in March the store couldn't do that particular colour (I can't remember why.) and gave me other options. When I saw Indian Red on the colour chart, I didn't think that I could pick anything else.
The benefit of having a few months off modelling was that I couldn't do anything so that I had time to think about the new plan and chat with some mates about ideas. After talking to one friend, he went home and came up with a plan. With a little tweaking, it's almost settled. The mainlines and main features are planned with a couple of small industries to place.
The fourth version of the Sapphire Coast Line is firmly underway.
Until next time.