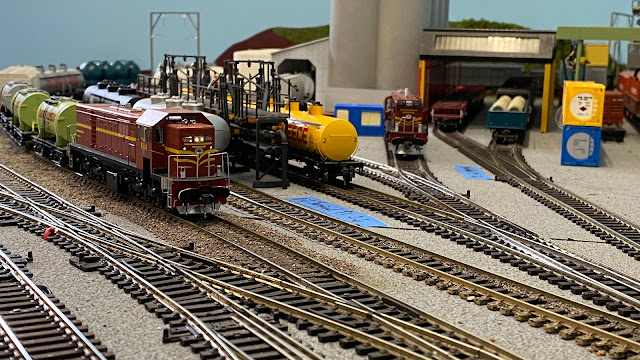 Yes... it has been a while. What's been happening? I've just been enjoying the layout and running trains. I've been working on some waybills and car card boxes for operations on the layout because realistically, all of the freight stuff is done. I've learnt some stuff on the way.

Most of the work in the train room has been furniture based. I've got a mould problem. I've wiped down as much of the furniture as I can with vinegar in January and even pained some old shelves. They look pretty good now. But the mould all came back too soon.

So I replaced the furniture. That helped. As did throwing out the unpainted ply. I was ruthless. Anything that had a hint of green fuzz went out the door. This included some old wooden boxes that I have had for nearly twenty years. One of the victims of this purge was my micro layout Billabong Marina. That had some nice green and yellow fur underneath it.

It might seem extreme but my cavalier attitude to mould in the past has lead to a mould allergy. The long and short of it is that it makes me cough and that is not socially acceptable these days.

Today was spent painting and installing more shelves to replace some old Aldi MDF shelves. The new shelves are very similar but the MDF is nice and white.

But while running trains, what did I learn?

The line from the coal mine is way too short for coal trains being loaded by a flood loader. These trains will block the return loop for the mainline, even if they go the other way than I originally planned. The coal mine head shunt runs along the same line as platform one of Bega station. The line veers right and there is a short stub siding. The plan was to put a signal box in there. Now there will be a new piece of track.

I reckon the coal mine needs a siding for unloading equipment and supplies such as explosives. I could also put a small platform there for workers trains. The old layout had a space for one at the mine.

I figured that if I was putting platforms in then one at the harbour area might work. I could put the Billabong Wharf station building there.

The Fine Fish building from Billabong Marina could fit in the harbour area but some track work is needed for it to fit - and some perspex as the track will be very close to the edge.

However, I reckon that the biggest thing that I have learnt is that it's just plain fun to run trains. That's why we're here in the hobby isn't it?

With the Easter break coming up, I'm hoping to get on with the terminus level and some of it is already in place.