Most people will recommend that you glue and screw timber when you work with it. I’m glad that I didn’t as it meant that I was able to reuse most of the timber frames from the old layout.


Unlike the last layout, this was designed around two feet by four feet (or 600mm x 1200mm) modules. Two modules would need to be longer (1600mm) to fit into the shed perfectly. The last layout had baseboards of various shapes and sizes.


Another change was how the layout would be supported. Advice was sought when building the old layout. I’m a member of the Gosford City Model Railroad Club on the Central Coast and one member showed me how his layout was put together. There were frames made using the ‘L-girder’ technique. Essentially, two bits of 42mm x 19mm are joined lengthways to form an L. These are combined to make your rectangular frame. Make sure that the Ls, now upside down are facing the same way where you need to attach them to the wall. On top of these you place more 42mm x 19mm timbers going across the frame, adding 42mm to the height. These timbers can be as long as you need them. To these you can add risers to lift your track bed. On the shed wall you screw bits of off cuts into the studs of the wall. These provide something for the frame to rest on as you screw it to the wall. You also need a further piece of timber or two to support it. The best way was to place the support onto the skirting board and shape the other end to fit into the L inside of your frame. I was told that it would be very solid.


It was. However, this time I was dealing with a tin shed and not an old fibro garage.


I was given advice by another member. This was to make sure that I had at least 3mm at the end of the layout for expansion. I wasn’t sure if this expansion was for the shed or the layout.


When I bought the house, the shed had shelves with some pretty serious brackets holding them up. I decided that I would use those to help hold the layout up. To these were attached sturdy timber legs that the hardware store had on special when I picked up the plywood tops. This would mean that I didn't have to worry too much about expansion of the board or the shed. The frames were made using the L-girder thinking but this time I braced them internally and placed plywood on top. The layout is going to be fairly flat where the trains run and there is going to be a lot of track. Cutting out road beds to fill in where the track isn’t going to be is not going to achieve much. Also in the planning, I realised that I would need an extra 200mm for the front modules for a bit of urban landscaping. 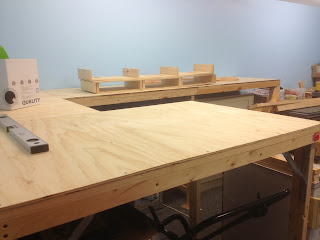 Under construction.
Once that was done it was time to lay some track.


It took a while but the track came together fairly well. I lay the track on lino. It was more advice given to me as lino off cuts are cheaper than cork. I can lay the lino out and cut around the laid track. It worked out well last time so I stuck with it. I used the thickest lino that I could, to raise the track from the board.
For some points it was their fifth layout. Some of them didn’t make it. The track was recycled and some of this was second hand on the last layout. A few new points and lengths of track were needed and an auto reverse unit for the two reverse loops was installed. It was all tested with a couple of cars from a HUB set, a Lima twelve wheeled carriage and a Bachmann 44 tonner painted as a 79 class. The high speed was far from astounding but it all seemed to work. 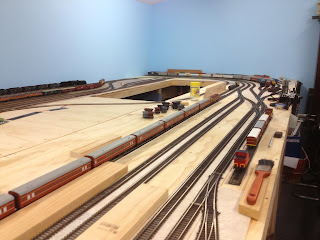 Once the track was down and wired up, trains suddenly appeared.
The next step is to motorise the points and build a control panel but that may take some time. Trains started to appear and needed to be run.
Posted by Tom at 00:40 No comments: