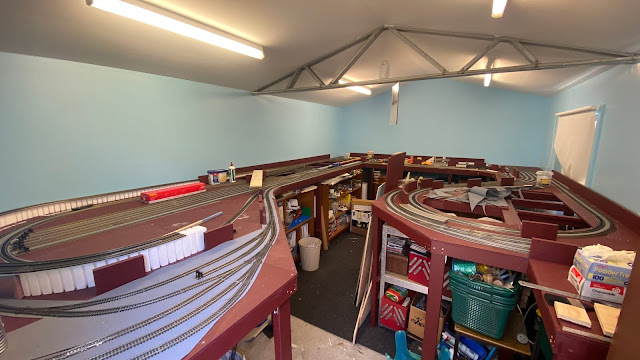 It's been a while but work has been progressing.

This image was just after the track was laid but just before wiring. I use a Digitrax system which was placed on the last layout. This time it's going to be housed on a shelf - roughly where the rubber gloves are.

The DCC bus wires are run around the edge of the layout for ease of access. Next to these wires the six strand phone cable for the hand held controllers.There is still some of this cable to be fitted as I had run out of double adaptors. I do have a Digitrax WiFi box thing that lets me use four smart phones. This is enough as, in less restrictive times, the layout could quite easily keep five people busy and a couple of those folks will be operating a couple of shunters. 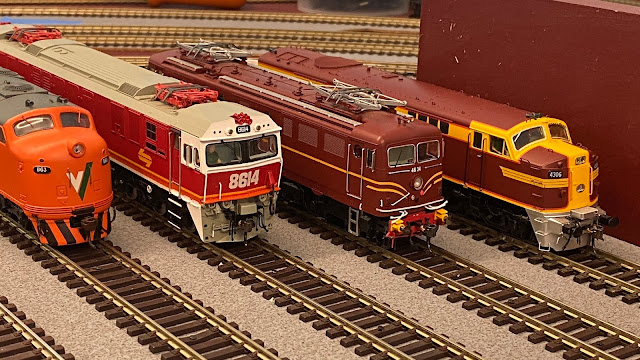 When I laid the track, I used a couple of rolling stock which sometimes cause me problems. We've all got them. Pushing them about seemed to go well. After power was applied to the track, I employed my awesome foursome of track testers. All of these locos have found faults before - especially the electric locos. They seemed to find the faults that were in the hardest to reach spots. These spots were joins on curves.

This time I tried to stagger the joins so that they are about four sleepers between the left and right track joins. Extra track pins were put in next to a couple of the tracks to make sure the joins weren't too sharp. The 43 class was very happy with my track. The B class wasn't. It found a few issues. use of a track gauge and track pins solved this. The other locos didn't skip a beat.

However, there was one train that I had forgotten about. The Auscision V Set. When running a certain direction over a certain section of the old layout, it reliable came off. It was given a run and found another fault which was soon fixed and thoroughly tested. I'm not saying that Auscision make trains that fall off the tracks but I am saying that sometimes my tracks make Auscision trains fall off. Hopefully my track is better this time.

As this is the lower level, most of what you see here will be covered. Before I add the next level, I want to ballast the tracks that transition into the covered area. There are a few lines to do.