'Does this mean your layout is finished.'

That's the question I was asked when I visited my local hobby shop and bought a handful of points.
The answer was that I thought that I had finished it last year.
There have been a couple of changes. Gone are the set track points in the loco depot. The 50 class didn't like the reverse 18 inch curves that they produced. I contemplated moving the loco depot to the back of the layout but thought against it as it would be too hard for most of the drivers to work.
I guess the great thing about having a blog is that you can look back over your meanderings and I found this aspect useful. Since beginning operations on the layout I have found that there are sometimes too many people to run the layout from the front. This has meant that I needed to put people in the middle to operate trains from the staging yard to the front to the layout. The station and goods sidings shunters are out the front, along with a third driver. When a driver brings a train in, he then takes the engine to the depot and swaps it for his next task. This could be taking another engine out or bring another train around to the front. They have all been short tasks which have involved swapping lots of trains. Unless you are the station or goods yard shunter as their engine are the same for the whole session.
That was until now. Over the past week I have rid myself of four pesky staging sidings to create a destination for some of my trains. It's not the best picture and the scene is in a spot where scenery was never planned. Believe it or not, the four sidings are on the same alignments as before. During the previous ops sessions these sidings held a suburban electric train, a couple of rail motors and a Vlocity set. However, with the last ops session these sidings were used only once. Things seemed to run more smoothly not using them. One of the rail motors still has a destination the other one may need to find a new home. I am contemplating adding sidings under the town scene but that's for another day.
The four sidings have eight different places to spot wagons. The run around will hold four bogie wagons and a CHG guards van and the there is just enough room for a 50 class to work the sidings. One draw back is that most tender locos have a KD coupler on the tender and not the front. As all of the sidings are facing the same way, the engine will be turned using a loco lift. It can then shunt to its digital heart's delight and bring the train back to the front. The engine will drop off its train, be serviced at the newly renovated loco depot (it still needs more work) and then take the next train to its branch line destination. This should take a driver a whole session.
This means that there will be two drivers with jobs that they can work with at their own pace. If this works out well, another similar area may have the same work done to it.
Something else that changed this week was the passenger train line up. 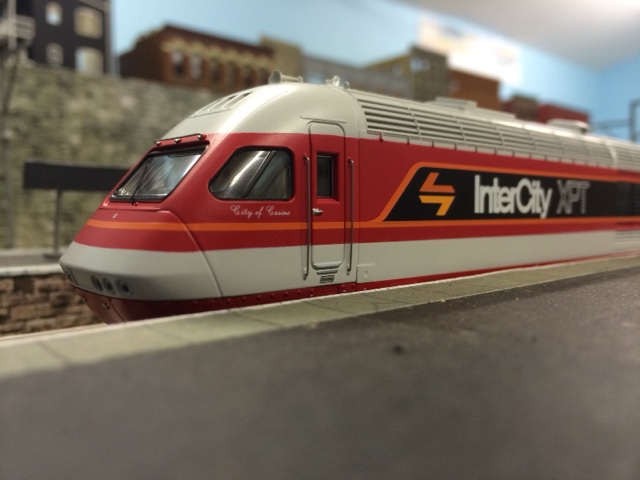 My little plastic people will be able to travel to Sydney in less time and with more frequent services.
Posted by Tom at 06:05 No comments: