Here's what it was:

From the front is the headshunt for the marshalling yard. Next is the inbound track. I'm not sure if I can call it the up or down as the layout is one big loop. The track it inbound to the terminus which which make it down from Sydney. However, Up trains from the terminus will travel along this track as well as they make their way to Sydney. The third track from the front is the outbound track. Trains travel from the terminus over this track to the reverse loop and then along the inbound track before joining the up and down lines of the rest of the layout. The last line is the short passing loop. Behind this would be the three or maybe four track loco depot and then a head shunt for the goods yard and its lots of sidings. The turntable in the background was a pipe dream. It was not ever going to fit.

The thinking behind this comes from the old layout. Look at this image below. 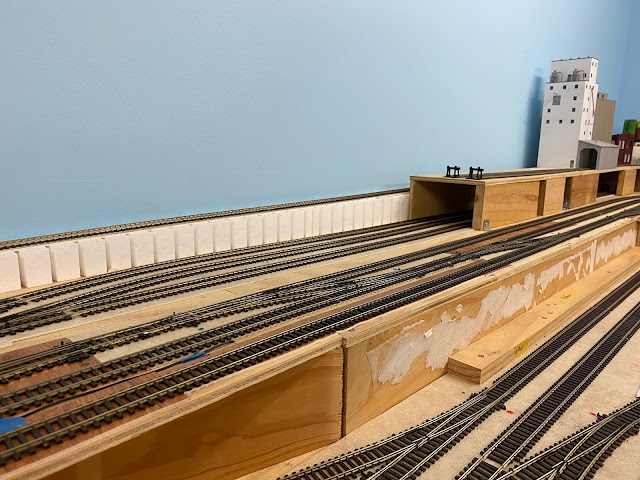 The main station was situated on a balloon return loop to the left of the camera. The track layout is virtually the same. The three sidings behind were the carriage sidings. The plan was to have a shed building at the front and retaining walls where the timber is. 2 metres, I thought was way too long for a single building. I just wanted to give an impression of a large building.

As an aside, a few years ago the the bloke who is building Everard Junction on YouTube built a scale carriage shed. It was great.

While planning the loco depot, I was trying to achieve something more than the stabling tracks from my old layout. I have steam, diesel and electric locos and I wanted some facilities for them to be serviced. I also noticed that I was reaching over the marshalling yard headshunt and two running tracks and the new platform.

What if I move the depot closer between the running tracks and the headshunt? The old layout had some loco storage sidings inside the curve of the headshunt could I put a turntable there?

I looked for ideas through a stack of Byways of Steams, model railway magazines, a Railway Digest article about Yeerongapilly loco depot and other sources for inspiration.

Here is what I have ended on. 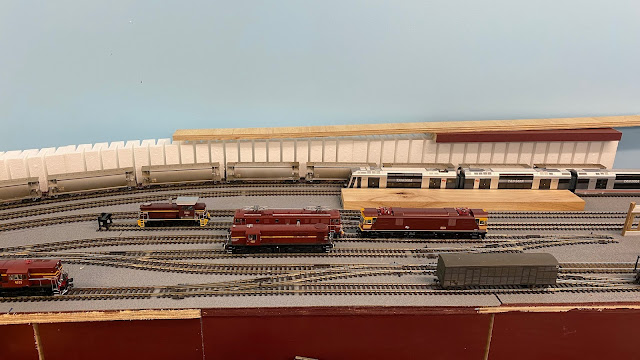 Right at the back with be a two track incline to the terminus. It is 2% and identical to the old layout. Most steam locos make it up with a suitable load. A couple more will need some more weights.

In front of the incline is the headshunt for the freight yard. It is designed to have a loco and eight of the wheat hoppers clear of the first point which will be to the wheat silos.

Next, where the Tangara is, is the outbound track. When running from the terminus, the Tangara would stop at this station, carry onto the return loop as though it has travelled to its suburban and return on the nearer inbound track to the same station. Then it will travel back up the hill to the terminus.

The 70 class is at the end of the marshalling yard headshunt. On the old layout, operators never have to handle trains on the headshunt. It is just a straight bit of track. The downside is that the exit crossover to the mainline can be blocked by locos. I plan to have all my points thrown by hand by the operators. That discussion is for another post.

The 46 and 85 class locos are on the electric loco storage track. This will have access to the shed as well. You can just see that to the right of the shot.

The 48 class is on the access track to the shed and can be used for storage.

The track in front is the arrive and departure track. The 45 class is on the fuel track for diesel locos. The GLX is on a track for a storage shed. I reckon that they need spare parts coming in and they'll need to be put somewhere. I don't really know how that works. I figured that I'd need some S trucks at the back of the shed  for rubbish as well.

Moving to the right you come to the coaling stage and turntable. See below. 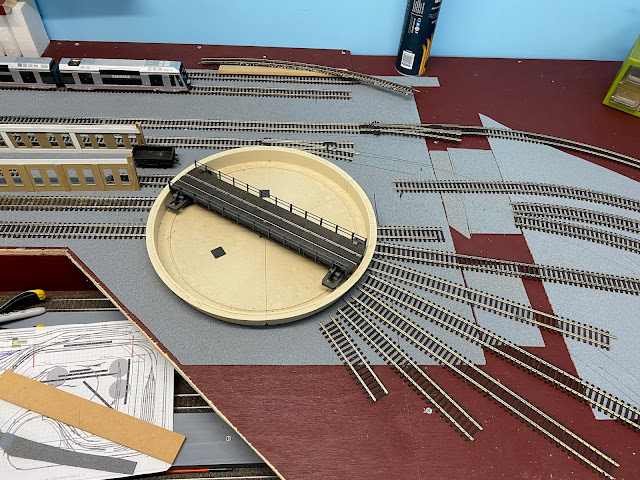 I'm using a Peco turntable. Before it's installed, it'll need some cleaning up and some paint. The arrival and departure track is directly in front of the shed. The opposite track of the turntable needs to be long enough for a Garratt. The track in front of the arrival and departure track is long enough for a couple of BCH hoppers to supply a coaling tower. It won't quite be 100% prototypical but I'm looking for an effect. This track probably won't be connected to the turntable.

Four of the tracks off the turn table should be able to hold at least 2 diesel locos each. I know that round houses hold one loco only per track but I am after storage.

Behind the turntable are two points. The closest is for a storage siding off the headshunt, which was handy on the old layout. The furthest is from a passing loop onto the inbound line. Both of these points are easily accessible across the turntable.

One thing to consider when planning reaches is a baggy sleeve that could catch on things.

The three tracks curving in from the right have been removed and will need to be realigned.

I reckon that I could have up to 18 locos stored in the depot. Not only that but a goods train will need to replace the S trucks full of rubbish, spare parts van, oil tank for the fuel siding and the coal hoppers for the the coal tower. That is an extra train and destination, as well as an interesting bit of operations.

Here is the big problem. The turntable sits directly above Bega Station. I can put a wall up the top to hide it from Bega platforms but the bigger issue is the need for support.

I will need to remove one retaining wall section underneath. That shouldn't be too hard. I will also need to prop up the top from the platforms. The right edge of the turntable is on the baseboard join. I'll need to do the Bega platform tops sooner rather than later.

If I put the turntable on the other baseboard I would have less support issues but no space for tracks off the turntable. I could have a long siding big enough for up to seven locos stacked on after the other. So long as they were in order of need this wouldn't be a problem. I wouldn't have extra space for the coal hoopers and vans.

My plans for during the week is to re-lay two of the curves that I need to adjust. I've done one so far.

Then I can do some wiring and have something running by the end of next week end.

It Really Has Been a While...

6 and a half months. Crikey! I didn't realise it was that long.

To carry on from the last blog post. The top layer went on and tracks were laid. The same four locos were used to test the next level.

However, not all of the top level tracks were put on. Enough track for a running session was put on. Missing were the goods yard, the loco depot and the marshalling yard and a suburban station. The latter was replaced by a relief loop which was big enough for a loco and six of Austrains GME wagons with a guards van. That's all that went in there.

I had an April deadline for a running session with blokes from the club.

There was lots to do. An empty coal train to swap with loaded wagons, the fore mentioned container train to take to the harbour yard, a couple of other trains to take from staging to destinations to shunt.

Nope. They just ran trains and watched them go around and chatted. Which was good but it didn't test the layout out, except for the mainline.

There was one major problem that I discovered when I was wiring the layout. The junction was totally wrong. 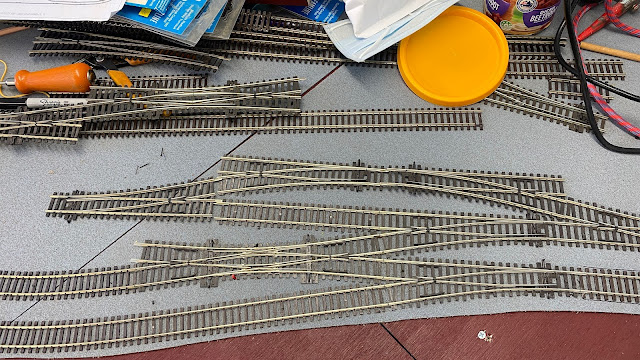 In the image above the points at the top are the entry and exit to the goods yard. Trains are meant to enter from the left, cross over to the year road and exit the image to the right. When the last wagon is clear, the train and set back, uncouple and the loco head off to the shed to the right of the image. The mainlines are the bottom two tracks. The middle tracks lead to and from the passenger terminal which will be on the upper level.

Trains from the mainline can't access the goods yard. 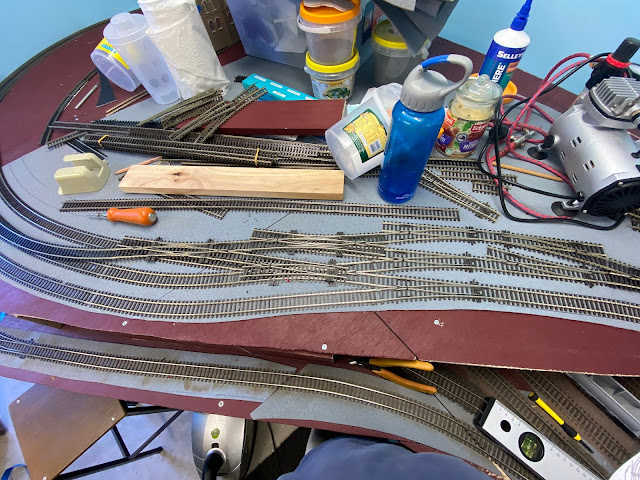 I could not believe that I had made this mistake in the planning and I was sure that I needed another double slip. Then I worked out that I was following an older draft. It would do until after the running meeting.

Then nothing happened until last weekend. I took a break from model railways. I just wasn't feeling enthusiastic about it.

When I think about it, my lack of enthusiasm was because, despite a couple of compromises and faults, my old layout had ten passenger stations planned. A couple were small and one of those would have been a request stop. It had seven destinations for goods trains to shunt outside of the main yard.

The new layout has effectively three stations. The terminus, Bega and Tathra. My freight marshalling yard is planned to have more sidings but they are all shorter.  There would be four destinations for goods wagons too.The loco depot wouldn't be effective either. It was looking to be three tracks wide and more for loco storage than for servicing locos. I might be able to get four tracks but that might be pushing it and a turntable is impossible. Turning locos would need to be done on the reversing loop which all trains would travel on.

It is however, more exciting than listening to trains go past. I live 400m from the railway line and since I've been working at home, I've heard a lot of freight trains go past.

So last weekend I fixed the dodgy junction and took out the relief loop to put a narrow island platform in. And that was the start of a major rethink and ripping up a fair bit of track.

If I hadn't had that break, I reckon I would have soldiered on with the plan and would have gone past a point of no return.

More in the next post. I'm hoping it will be sooner than six months.