‘Where you won’t find any fancy overheads.’

With apologies to the lady from Best & Less.


For years I have wanted to put up overhead wires on my layouts. When I was a kid I built some out of balsa for my British outline layout. It was a 6’x4’ board and being somewhere around twelve years old it was pretty ordinary. I did make up a jig and solder my own wires from fuse wire. I couldn’t get the bends out of it and the solder joints were far from good. I had intended to save my pocket money and buy a Lima Cl87. As I was twelve with a permanent board, the layout lasted somewhere around six months before it was changed again. The joy of set track meant that the track plan changed often. The balsa overhead masts were disposed of and never thought of again.


With the old layout on the Central Coast, I did begin to make my own stanchions again using old track and paperclips. Finding the right little beads in a craft shop was too much of a challenge and they didn’t fit onto the paperclip. I made four of these to fit under an overall station roof and hammered them into the layout. They were a little short and needed a bit of work. I also considered using the Dapol masts. Model Rail, a UK magazine ran a feature on overhead masts and I did consider ordering some from the UK as they looked about right. Then came Southern Rail to the rescue.


When planning the new layout, I had the knowledge the Southern Rail Models had produced overhead masts. As I sold a few items surplus to requirements at the Epping Model Railway Club’s exhibition on the long weekend I was able to buy some masts for my electric trains to run beneath. I drilled a few holes and presto! The open station approaches were changed forever. 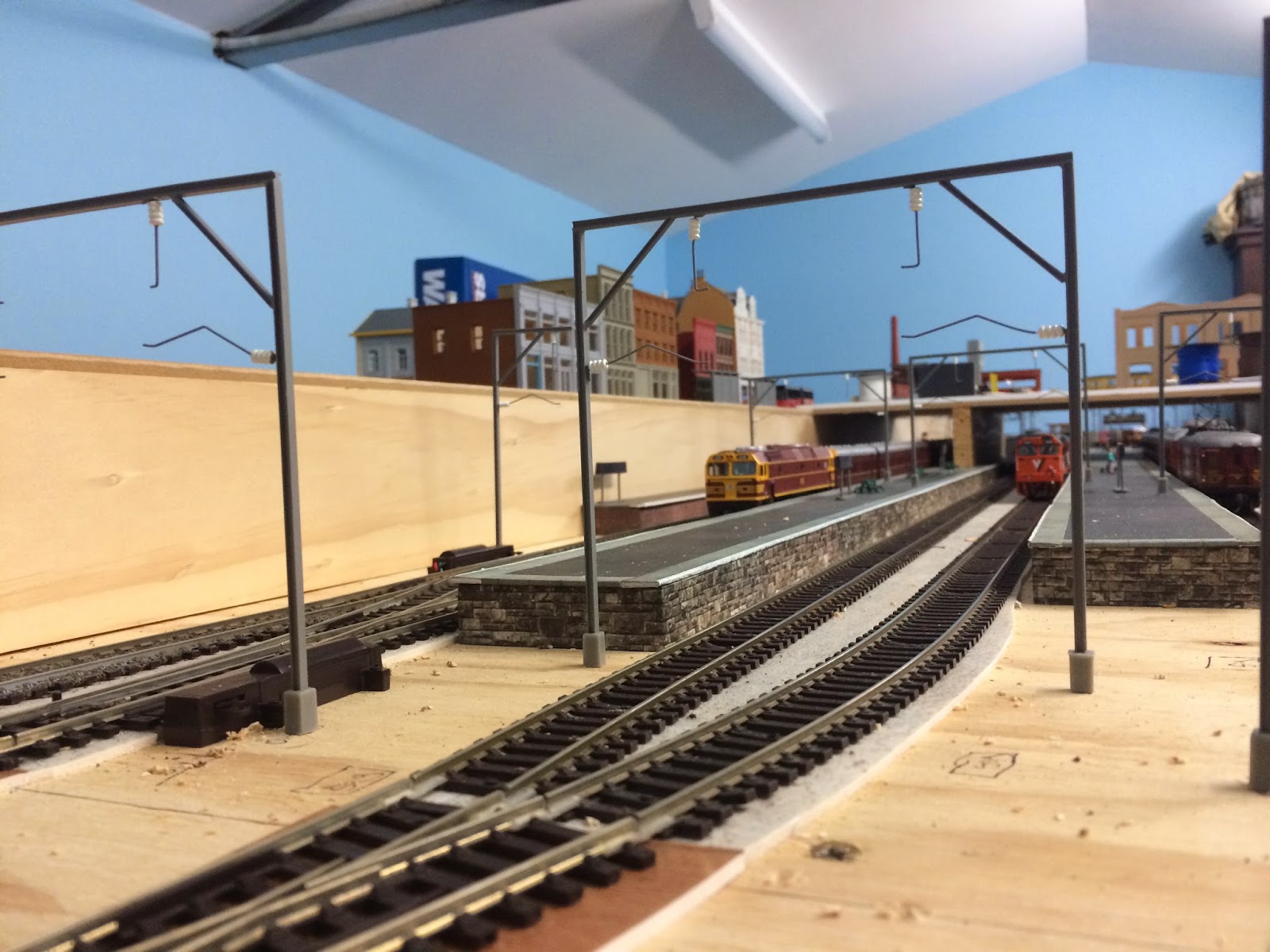 Looking from below the cathedral. 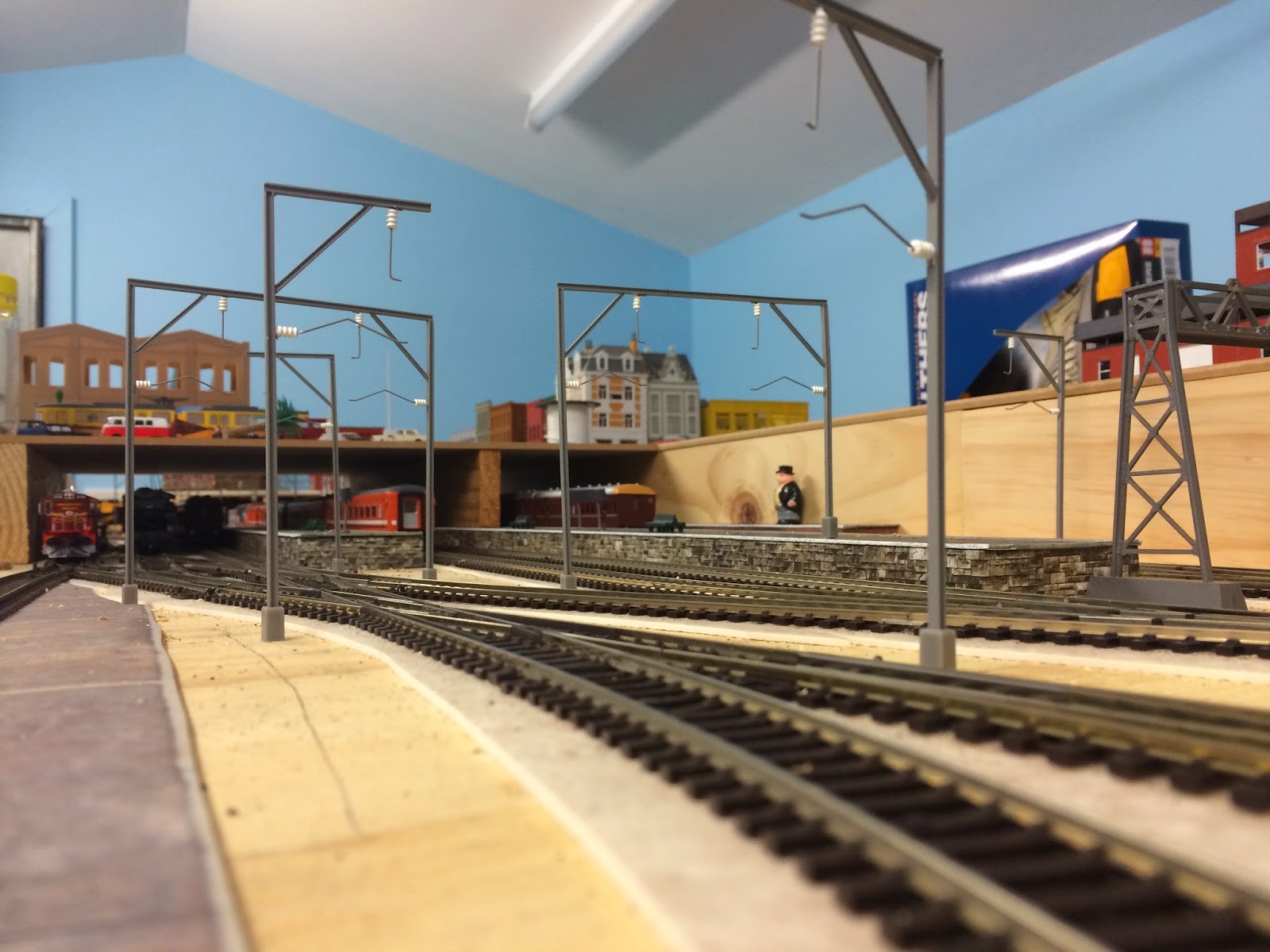 Looking from the goods yard. The line in the foreground leads to the loco depot and will the extension when it is built.
I know there will be some who will ‘Tut tut,’ as I write that I have no intention of installing the wires. Experience when I was twelve taught me that it is too awkward to clean the tracks with the wires in place. I had to rebuild some of the masts that I knocked over. The pantographs will be up and they will past safely under the bits that hold the wires up so the impression will be there.


I’ve spent a bit of time looking at the overhead wires and I think that I have the spacing right. At Hornsby sheds four cars fit between the posts. My station building is build above the platforms and is 60cm wide when including the road and tramway. The wires wouldn’t travel under this at the full height between the carrying wire and the contact wire therefore I would need about two car lengths between the posts and the station building structure.
I was able to buy enough posts for the station and parts of the goods yard. There are a couple of sections where the masts will need to cross four tracks but this will be a task for another day. However, I think the new masts are pretty fancy overheads.
Posted by Tom at 06:11 No comments:

It’s been way too long since the last blogpost. Since January, the street level went on, along with a small flurry of building work on top of it. Buildings were placed and moved, quickly painted, moved and adjusted a little bit more. 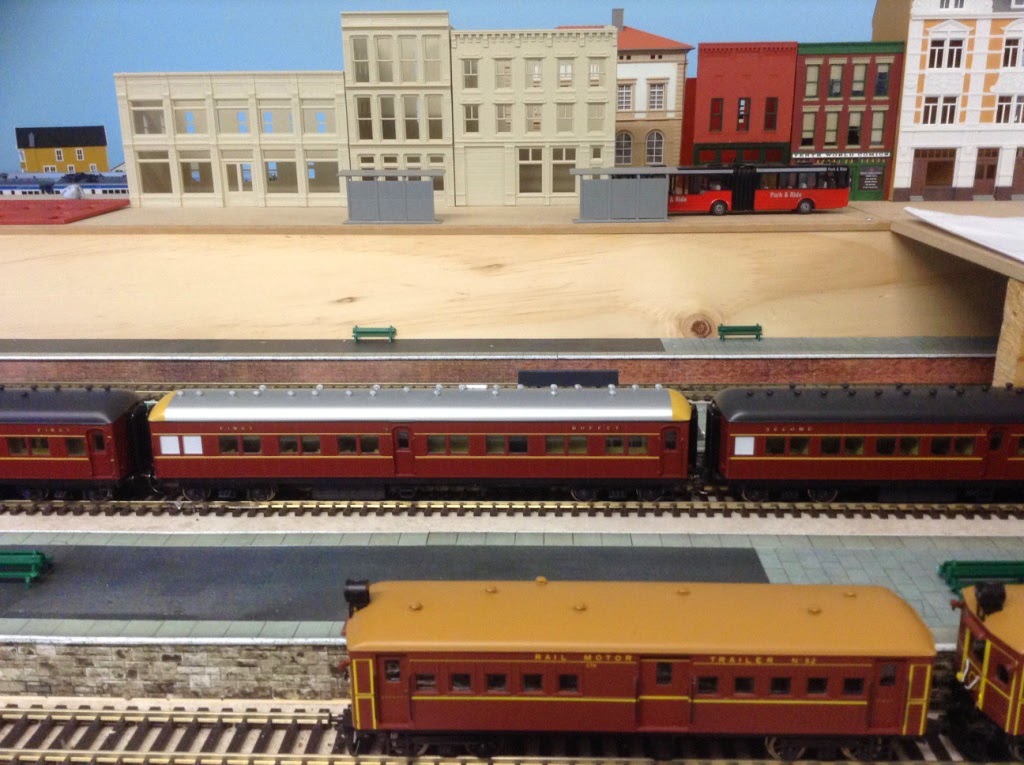 Looking across the Melbourne end of the station towards the town. The idea is that enough tall buildings will block the view of the staging yard when the operators are sitting down. The wooden wall is hiding the reverse loops. It will be lined with the same stone finish as the platforms as the station would have been built at the same time as the wall. The brick platform was added years later by the railways when it was realised that another platform was needed and bricks were cheaper than local stone. 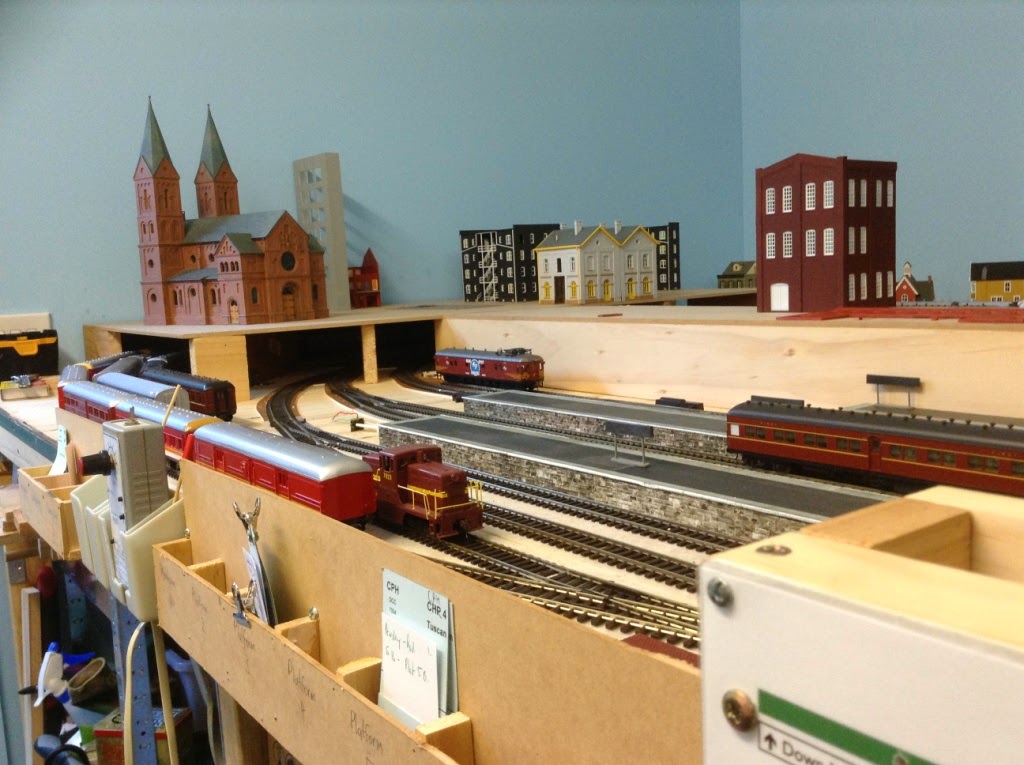 The southern end of the station. The tracks disappear underneath the town. There will be a town hall next to the cathedral and a square with some shops. I bought the cathedral at the Forrestville Exhibition in 2012 at the bring and buy stand. I couldn't believe that someone would try to sell it. I also wondered who on earth would buy it. Turns out that it would be me. I was looking for a few small buildings to fill a block on my old layout on the Central Coast. I figured that one building would fill the gap nicely. I plan to light it from the inside and put a couple of spotlights on the outside. The carriage sidings will have a three road shed that will disguise the fact that the sidings curve to go under the cathedral. 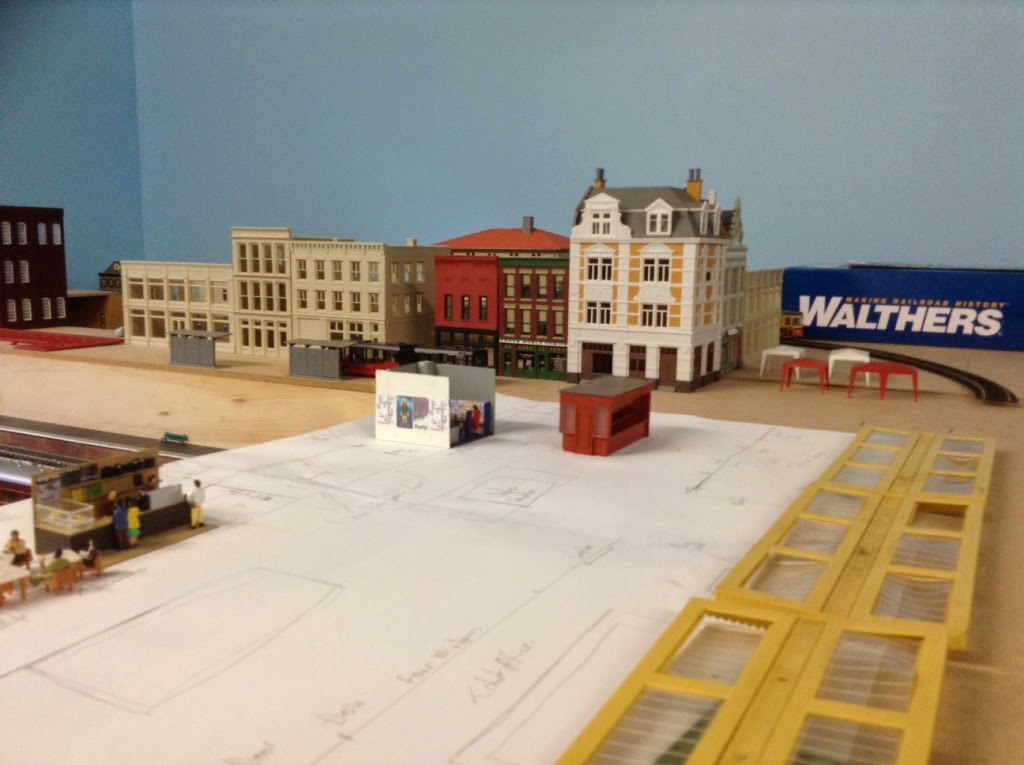 This is the main station building. It will be built from Walthers Modular bits. It will occupy an area of an A3 sheet of paper. It will be four two storey buildings which will support a double length Peco overall roof. The Hornby platform canopies will be out the front of the main entrance and will house a tram stop. (I bought a cheap second hand one at the Castle Hill Exhibition last year.) The red and white shade shelters will have market stalls and the street will look down to a Walthers Grand Union Station which will be the city's art gallery.

Then things seemed to stop on the building front. After have a few blokes around and having them run the layout for the afternoon, I mentioned at a meeting that I wouldn’t mind setting up an operating night. There were a few who were interested.
The next step was to work out some sort of timetable or schedule for trains to run. There were a whole stack of questions that I had to which I had to find the answers.