Let's cut to the chase. I'm going to poke the track and wheel cleaning bear.

Here is my track cleaning train. How I got to this train is a bit of a story. 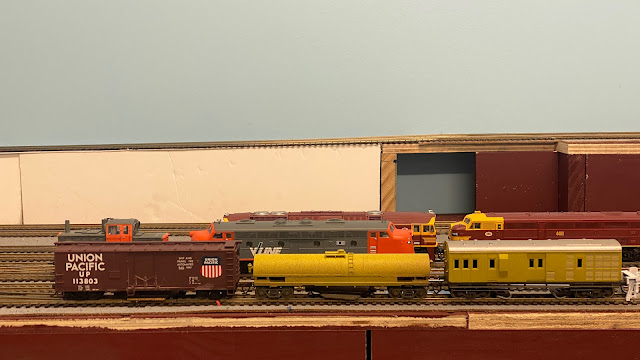 I'll start by saying that track rubbers are not good. They are abrasive. As one modeller once told me, no one will let him clean their car with a track rubber.

However, some of my track is really old and so the 'don't use a track rubber' ship sailed long ago. I use a Fleischmann track rubber and I find that it does the business. I also use a Walthers track rubber on the bottom of one of their track cleaning wagons.

Another fact is that if you regularly use your layout, you need to clean it less. I have found this to be true over the years. Covered tracks also need less cleaning. I once left a small portable layout covered for six months and the track was fantastic. In comparison my main layout left uncovered next to it had grubby tracks.

Back in 2005 when I joined the Gosford City Model Railroad Club, I noticed that they had a couple of modified wagons which had track rubbers attached to a pad underneath them pushed by a loco at the start of every night. One car had a masonite block underneath it with the rougher side to the track. It worked with the same effect. I found a track cleaning car in a local hobby shop and thought that I would give it a go. It's the Union Pacific car.

I had seen another modeller's track cleaning train years ago. He had a Centerline track cleaning car which he had put a body on. These cars are a rectangular slab of brass or metal with rectangular hole in the centre. In that is put a brass cylinder which is covered with a strip of Chux wipes. The Chux is secured with a rubber band. It was doused with isopropyl alcohol and run around the track. Then a new Chux strip was doused with CRC 2-26 (I think). The train was run around the layout and the layout was given a couple days for the CRC 2-26 to work its magic. Then he reckoned that he didn't need to clean it again for six months.

I made similar wagon with an old Trax MHG, I swapped the bogies for some Powerline clip in bogies with metal tyres on the wheels. For the cylinder I used an old 35mm film canister which I cut down and filled with lead sinkers, all held together with Tamiya masking tape. I used an old Lima loco weight to hold it down. It worked. And the above method worked well... the first time.

He has also replaced the Walthers track rubber with a bit of cork to help collect some of the dirt before the roller reached it. So I did the same. It does work well.

The second time I used this treatment there was too much CRC2-26 on the track and I had to wipe it all off.

The track cleaning train was relegated to the off layout shelves until I needed a better solution to hand cleaning the tracks.

With the last layout I needed to employ another track cleaning train. By this stage I had started using the Noch clip on cleaners. They are a little brush of sorts that clip onto an axel of a wagon. They won't clip onto newer Australian models but will to a couple of the older Powerline wheels with metal tyres which are on the old MHG. The Union Pacific wagon was re-employed with the cork pad and I bought another Walthers track cleaning car with the rubber. This time I pulled the body off and put a Casula Hobbies or Silvermaz kit water gin on top. I painted the two Australian wagons yellow to represent the permanent way department.

Next time I'm down Liverpool way or at an exhibition, I'll probably buy another water gin kit for the original track cleaning car. I'll also buy a roll of HO underlay cork as it fits well on the pad. The cork was originally blu-tacked on and it stayed for quite a time. I replaced the cork and used a UHU glue stick. It worked a treat.

One thing that I have found with these Walthers wagons is that you need to take a spring off one of the screws that hold the pad in place. After a while, turn the wagons around to even the wear.

CRC 2-26 is not good on traction tyres. I have Minimodels suburban sets with traction tyres so I need something else. We also used CRC 2-26 to clean wheels of locos. We'd spray some on a paper towel and place it in the track. Next we would place one bogie on the paper towel and the other on the track, turn the power up and hold the loco in place. We would then turn the loco around and clean the other bogie.

This worked well too and would spread the CRC 2-26 thoughout the layout. However, we had one bloke in the club who hated it. He was German and with his accent he would call CRC 2-26 "Das oily schitt".

To clean loco wheels he would only use a brass brush to scrub the wheels. Peco produce a wheel cleaner like that. I have two so that I can clean opposite wheels at the same time. They are connected to the track with alligator clips. When hooked up and the power turned up the Peco brushes are applied to the wheels which spin and get cleaned. It works 99% of the time.

However, when I had to clean the wheels on my Southern Rail interurban, the wire brushes weren't as successful. On closer inspection, the insides of the wheels were dirty and the pick ups weren't able to do their job.

To solve the problem, I spayed some paper towel with some isopropyl alcohol and put the loco on it. I also took the bogie being cleaned and made sure the towel was brushing the inside of the wheels. It made the world of difference.

I put some isopropyl alcohol on the cork and ran the track cleaning train up and down the incline from the terminus. This also made a world of difference but the cork needed replacing. I've got a supply to keep me going for a while.

There are other chemical products out there such as Rail Zip, which I haven't used with success, and Deluxe Track Magic, which I have yet to use. According to UK publication Model Rail the latter works well. I have a mate who swears by it.

Everyone has their own method of cleaning tracks and with the past treatment the track has had, I find that my little train works well.