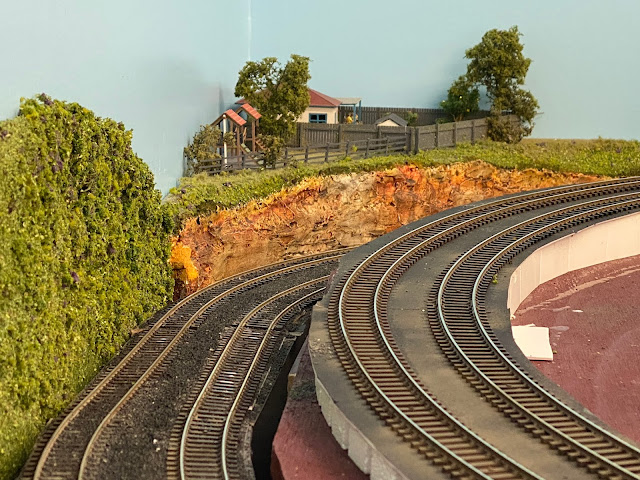 Oooh! What a nasty gap. I always thought that it would be a problem for future me. A bit of masking tape and some plaster, paint and some scenic material later and we have this. 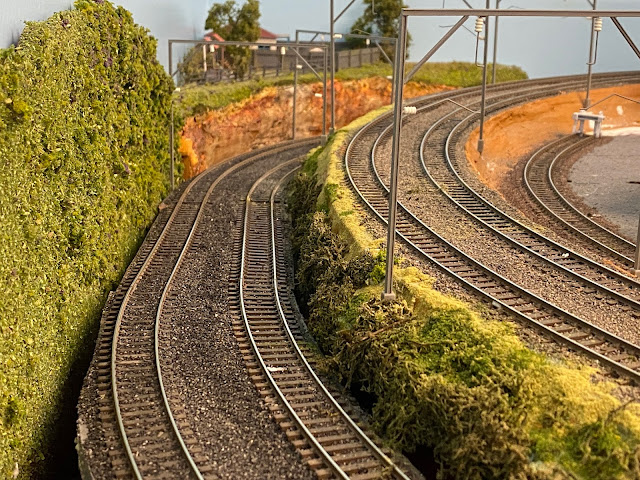 While the gaps aren't gone, they are better disguised. The big one on the left is for future me to deal with.

The end result for today is this. 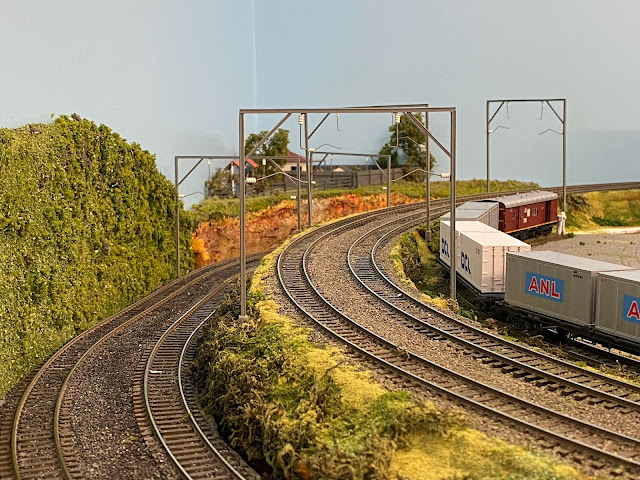 This is closer than people will get to the scene but I can tell that there are some patches where the ballast needs topping up.

Some of you may notice that I am using three different shades of ballast in this scene. There is a fourth shade around Bega. At the main junction of the inclines the track looks like this. 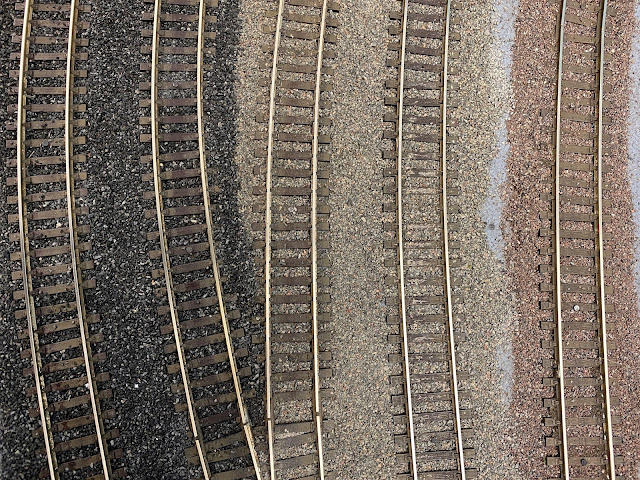 The three colours are for three different routes. I got the idea from Tony Koester, the American railroad modeller, author and legend. On his layout he uses a different colour of ballast for his mainline from his yards so that his operators know which track is the mainline.

All of my sidings that have so far received ballast all have Bombo ballast, which is the brown ballast on the right. The mainline on the lower level has a shade of grey of unknown origin. It is a lighter grey but you can still discern the mainline from the sidings.

On this level the mainline will have Ardglen ballast, which is a dark grey and on the left. This is the track that comes up the incline from the bottom level. This track runs along two and a half walls of the room before entering a return loop and coming back before heading back down to the bottom level.

The middle two tracks head up to the terminus and has Martin's Creek ballast. All of the ballast used is from Matt's Ballast and picked up from my local hobby shop or exhibitions.

The track on the bottom level to Tathra should have Martin's Creek ballast as well but I used something that looks more like budgie grit or crushed shells. I thought it was good stuff. When I get the chance, I'm going to replace what I can with the real deal.

Operators will know that the lighter grey of Martin's Creek represents branch lines and the dirtier brown of the Bombo ballast as sidings to help them guide their trains through the layout as they change the points themselves.

This is a function of interior designed used in a lot of public spaces such as shopping centres and airports, if you remember going to them. The floor is a colour that takes you where they want you to go and can help differentiate from thoroughfares to areas such as shopfronts where they don't want people bustling past. I had to dig the clip up but I saw this years ago.

I'm hoping that using similar principals of using colour will help operators. My layout is complicated and while I know it well, visiting operators visit once a month so it takes a while for them to learn the route. Hopefully, this will speed the process up.