December was busy. Apart from short bits of modelling, there was a running session. As I'm a messy worker, (A new year resolution to sort that out this year.) there were a couple of days tidying up.

Here is where I am up to now.

4. Sort out fences - paint them too. Completed
5. Create back yards. Completed 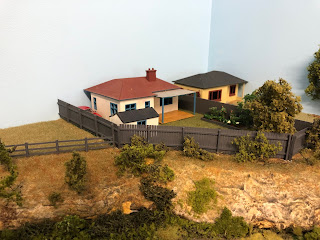 6. Glaze and light houses.
7. Add static grass and trees to landform. In progress. Needing to finish ballast loading area.
8. Create platform for loading dock. In progress. Needs tarmac top.
9. Place on the layout.
11. Build the new building for the conveyer to run from.

18. Finish industry next to brewery. In progress - needs some detailing.
19. Build warehouse backs for back scene between Brewery Lane Station and houses. In progress. I have built two but I might need one or two more. 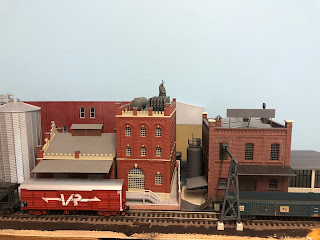 20. Retaining wall in front of brewery and the next door industry.
21. Finish off static grass and scenic touch ups. In progress.

22. Paint the sides of the tracks. In progress - there is still the station to do.

Another small project was painting an HO scale Michael Portillo with a copy of Bradshaws. He came from a box of Preiser figures bought second hand. A small - more like tiny - piece of styrene was placed in one of his hands. He was then painted in appropriate colours. 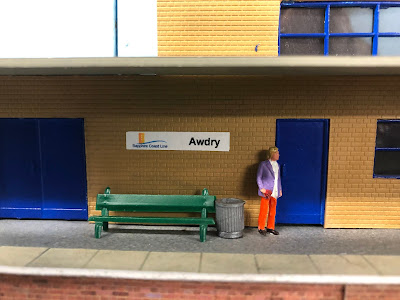 Don't forget to check out my other blog Billabong Marina.

I've been pottering about the layout making small progress in little bits. Here's where I'm up to.

4. Sort out fences - paint them too. In progress. - fences on order. Still waiting
5. Create back yards. In progress.
6. Glaze and light houses.
7. Add static grass and trees to landform. In progress. Waiting for fences to do this in one go.
8. Create platform for loading dock. In progress. Needs tarmac top.
9. Place on the layout.
10. Ballast the siding and the mainline. Completed
11. Build the new building for the conveyer to run from.
12. Plaster Goods Yard. Completed Used sand paper instead. 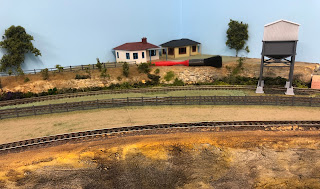 The image above has just had a bunch of scatter material and static grass put down. The sand paper gives the goods yard area a bit of compacted dirt look. I'll experiment with some paint to try and match it to the panted plaster in the foreground.
13. Ballast Points near the station.
14. Build signal box for the station.
15. A fence, or hedge for the station.
16. Build grain unloading facility for brewery.
17. Finish brewery. In progress.
18. Finish industry next to brewery. In progress - needs some detailing. 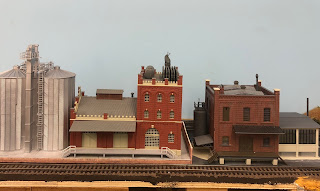 The brewery and the other industry are on separate boards. The brewery needed to be raised as the wagons hit the awning roof and the platform was a bit low. The other industry (an engineering company) is on some matte board covered with tarmac paper.
19. Build warehouse backs for back scene between Brewery Lane Station and houses.
20. Retaining wall in front of brewery and the next door industry.
21. Finish off static grass and scenic touch ups. In progress.
22. Paint the sides of the tracks. In progress

I've a busy week this week. The overnight work thing that was postponed due to catastrophic conditions is on this week and I've a couple of evening meetings. I reckon that my fifteen minutes a day might not be much more than that this week.

22. Paint the sides of your rails 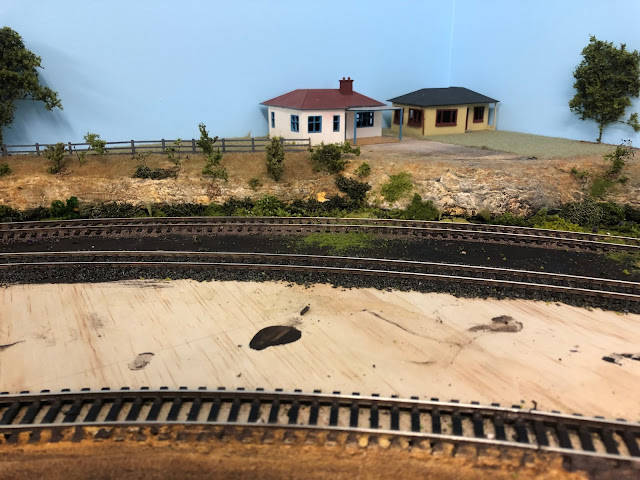 Thanks Bob. It looks much better now. I did both sides too, where I could.

The baseboard was painted and the track ballasted.

After that the gap between the polystyrene and the baseboard was covered up with lichen and foam. A bit like a skirting board. 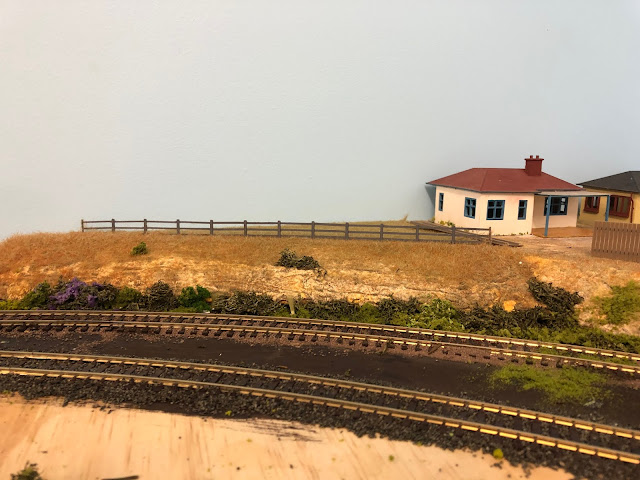 The bare board in the foreground will be part of a goods yard and will be fenced off, and the board covered in a light layer of plaster and painted to represent dirt or perhaps tarmac.

The scenic skirting board travelled most of the length of the new landform. 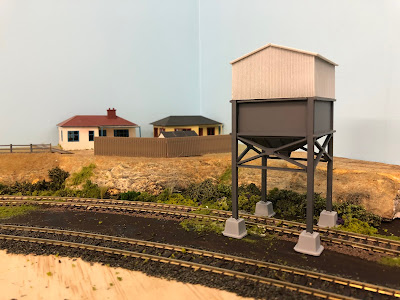 It occurred to me that the the greenery around the ballast loader might be covered in some spillage. I scraped away the vegetation that I had just put down and had another go. 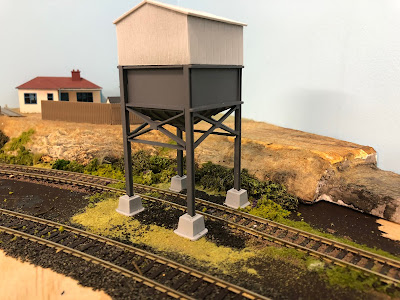 After looking at some embankment lately, I noticed that a lot of them have a whole heap of things growing on them. 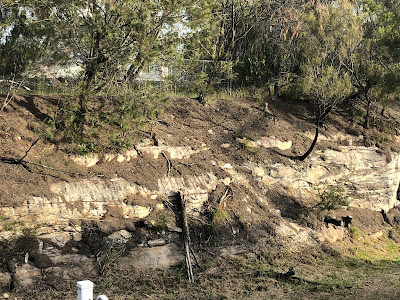 I popped into my local hobby shop and picked up a couple of packs of the Woodlands Scenic Fine Foliage. They're sometimes also referred to as tree armatures.Holes were poked into some of the plaster, the armatures dipped into glue and then planted.

I though that buying a couple of boxes would last me for a few years but some of the armatures are pretty much trees in their own rights. See the image below. 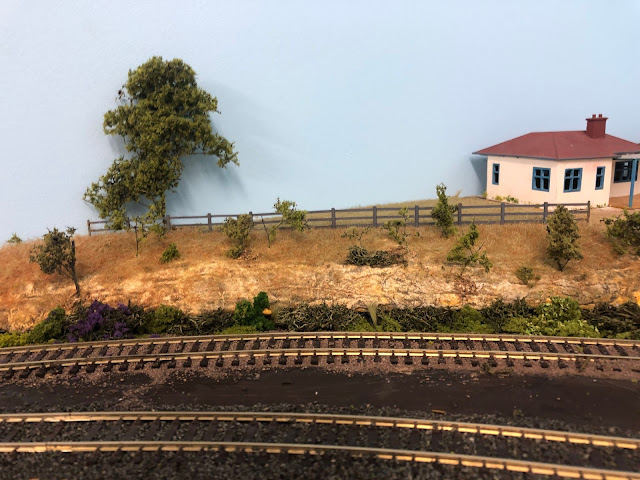 It's also a touch of before and after between the first and last photos.

1. Glue the polystyrene together. Completed.
2. Coat it with plaster.  Completed.
3. Paint it.  Completed.
4. Sort out fences - paint them too. In progress. - fences on order.
5. Create back yards. In progress.
6. Glaze and light houses.
7. Add static grass and trees to landform. In progress. One yard to go.
8. Create platform for loading dock. In progress. Needs tarmac top.
9. Place on the layout.
10. Ballast the siding and the mainline. In progress. Track behind the brewery is still yet to be done.
11. Build the new building for the conveyer to run from.
12. Plaster Goods Yard.
13. Ballast Points near the station.
14. Build signal box for the station.
15. A fence, or hedge to the station.
16. Build grain unloading facility for brewery.
17. Finish brewery.
18. Finish industry next to brewery.
19. Build warehouse backs for back scene between Brewery Lane Station and houses.
20. Retaining wall in front of brewery and the next door industry.
21. Finish off static grass and scenic touch ups.

I reckon that the brewery might get a look in this week.

Catastrophic fire conditions in Greater Sydney saw my overnight work trip on Monday cancelled and my workplace closed on Tuesday.

There are some silver linings. I was able to knock off some things on the list posted on Sunday night.

The first was to glue the polystyrene together. The two notches are for wires for the lights. 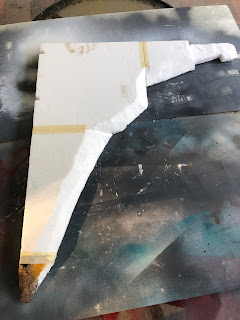 It was held in place with some masking tape. Then it was covered with Plaster or Paris, poured on and spread out with a paddle pop stick. 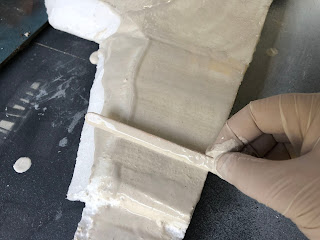 After it had dried, I painted it with a wash of acrylic paints - the same shades used on the embankment earlier. 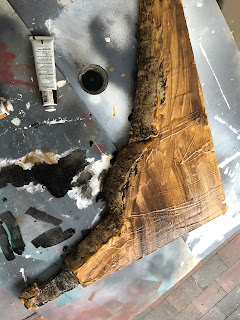 Granted it doesn't look amazing but after a bit of static grass magic is applied it should look better.

Today, I applied the glue and static grass. Not all of the grass was applied today. I wanted to make sure that the glue was dry left and right of the where the white house is. The is none around the ballast loader as I want to put a building in that location first.

I painted a fence for a park next to the white house. I thought that I had enough of the Walthers wooden fencing to complete the job but I want big back yards. Some more is on order, as is a playground. I'm going to hold off on this part until I get the fences and the playground. Then I will be able to finish this in one or two evenings.

It's a little disappointing that I've put the houses so high up as I can't easily see into the back yard with the fence up, (The top image shows the view.) especially as I have a whole heap of vegies to put in the gardens. However, I reckon that I'll put them in anyway. I have a step stool so visitors can stand on that to see the garden.

The foam doesn't quite sit right on the board. I'm hoping to cover the gap with some vegetation. I could glue it down but I want to be able to remove this when I need to.

The base board needs painting before I get much further and the track needs some ballast. I reckon, they'll be the next tasks.

With the embankment as far as it can go for now, my attention has turned to the north eastern corner. It has a couple of houses and a ballast loader.

Initially, the ballast siding was to head further into the corner using first radius track. It would disappear under a hill and run hidden beside the main line. The scenery was to be made to trick the viewer to think that the line was going the other way.

However, after reading about the blue metal siding in Richmond, I thought that this could be a good alternative. The siding ran beside the mainline to Richmond with a ballast loader next to siding. The siding wasn't long and it certainly wasn't designed for the filling block ballast trains but one or two BCH type wagons.

I stumbled upon an YouTube clip which showed 620/720 sets running in and out of Richmond station which showed the facility as the rail motors went past. It looked as though blue metal was run up in buckets which tipped onto the side loading facility and down a chute into the waiting hopper.

All I had was a screenshot of the YouTube clip. It looked impressive and would be a challenge to build but...

I had told someone recently that I wanted all of Awdry up to the Brewery Lane Station finished by Christmas. Scratch building the facility would be time consuming, as would loading the trains with ballast.

I also have a big coal mine kit an I know that there is one bit that I won't be using. Could that fit the bill? It would be quicker to build. So build it I did. 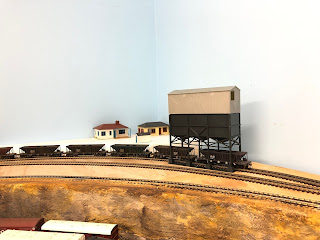 It is great for a coal mine but way too big for my two neighbours who live nearby in Polystyrene Heights.

Martins Creek has a ballast loader right? A quick internet search brought up a couple of images on Flickr. It has a smaller loading bin with a conveyer bringing ballast up to it.

I reduced the loading bins from three to one and reduced the height of it. The shed on top was also reduced. 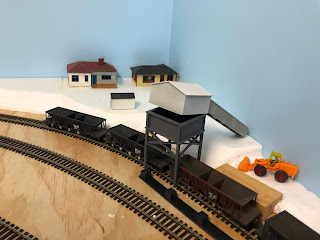 There is a weight distribution problem to be solved soon, as well as another building for the conveyer to run from. Some more polystyrene was cut and shaped. The front end loader won't live there as it is way too big for the loading dock. The loading dock is for supplies for explosives and other stuff.

The above image doesn't do the new cut down loader any justice. This one might help. 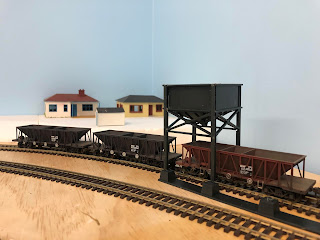 1. Glue the polystyrene together.
2. Coat it with plaster.
3. Paint it.
4. Sort out fences - paint them too.
5. Create back yards.
6. Glaze and light houses.
7. Add static grass and trees.
8. Create platform for loading dock.
9. Place on the layout.
10. Ballast the siding and the mainline.
11. Build the new building for the conveyer to run from.

Some of these things don't have to be in that order

Work has me away tomorrow night but I reckon Tuesday eventing could see a couple of these tasks knocked off the list. 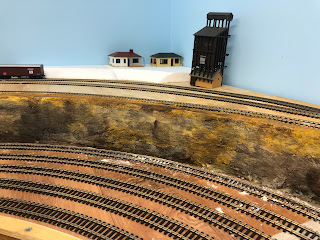 Over the plaster, I added a wash of gold ochre, burnt umber and black acrylic paints. I painted it on with a brush. It turned out pretty good.

The next step if the houses in the corner. I'll need to try and cut another bit of foam as I think I have taken too much land off one of the houses.

However, with an ops night on Thursday, tomorrow will be a tidying up evening.